Open 24/7, no need to find parking & shipping within Europe is always on us! 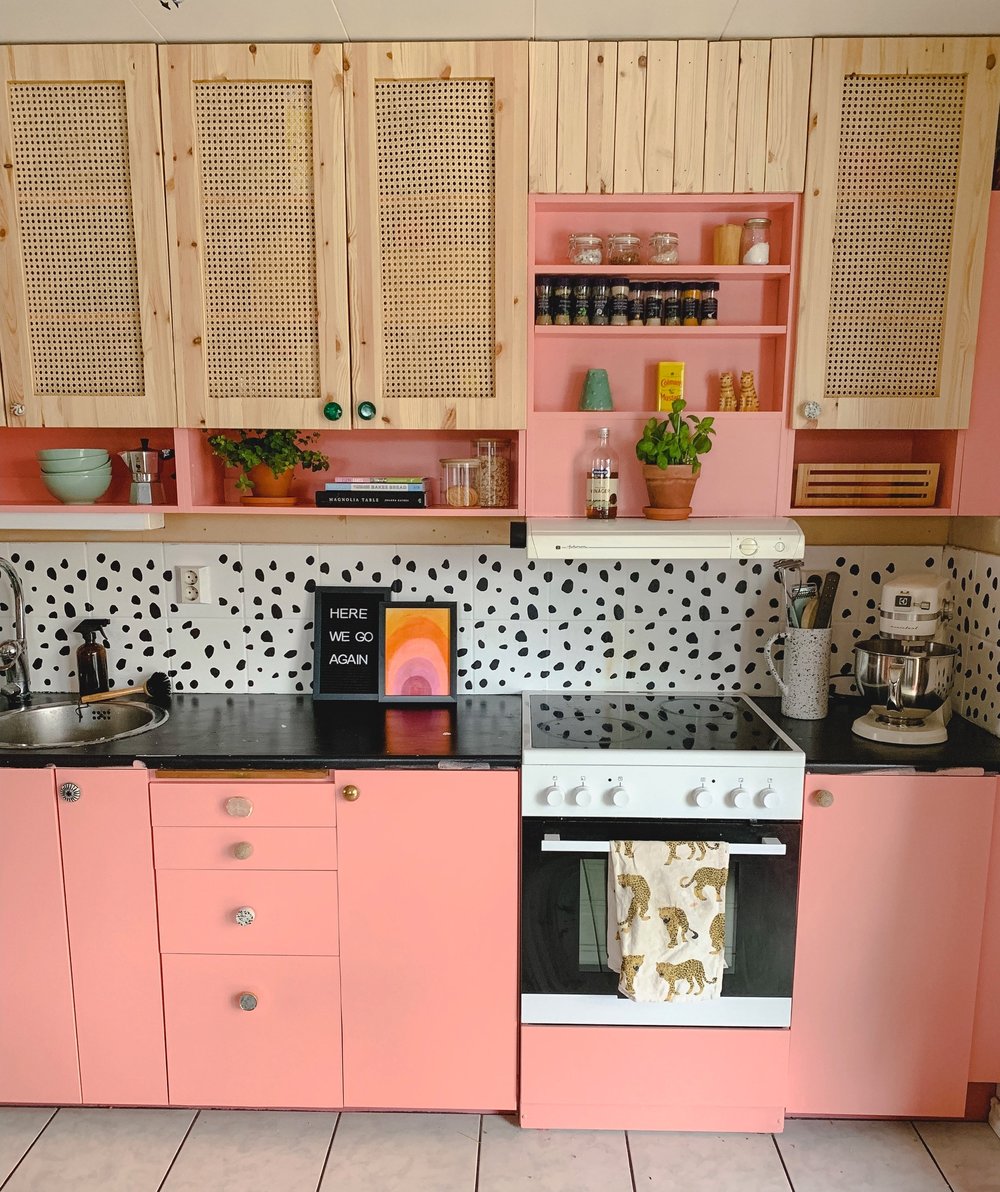 Here comes the much anticipated DIY Rattan Cabinet Door - How To! This is nothin new and has been done by many, but regardless of that I wanted to show you how I build our upper kitchen cabinet doors from scratch, giving them a natural look with a rattan backing, set into a frame.

I started off with buying 18x40x80cm solid pinewood boards that had the approximate size of what I needed. Since they were solid, I had to cut a ‘window’ in myself. I could have gone about this the other way, buy building the frame myself, but I did not have the right tools for that venture that I decided against. As I built these cabinet doors from scratch, there were a few steps that I needed to add on top, such as drilling placement holes for door hinges.

Step 1 - Make a template for the doorhinge holes

This step is the fist and also quite an important one, so you want to get it right! I used the measurements for distance between the side and hole from the original doors to start with and decided at what height etc they should go. Since the new doors are taller I had to figure out the exact placement in relation to the pre-drilled holes in the cabinets. This I did by holding the door up to the cabinet itself and taking measurments. It was a bit of trial & error, and a lot of going back and forth to get it right - but so worth it. If measurments are of you run into problems like uneven or not fitting doors at all.

To make the template I used some cardboard paper that came with the doors for the lower cabinets.

The images below are from when I made the template for those as well. Since I purchased IKEA doors, I had to adjust them as well, as our original kitchen had different measurments and doorhinge placements all together. 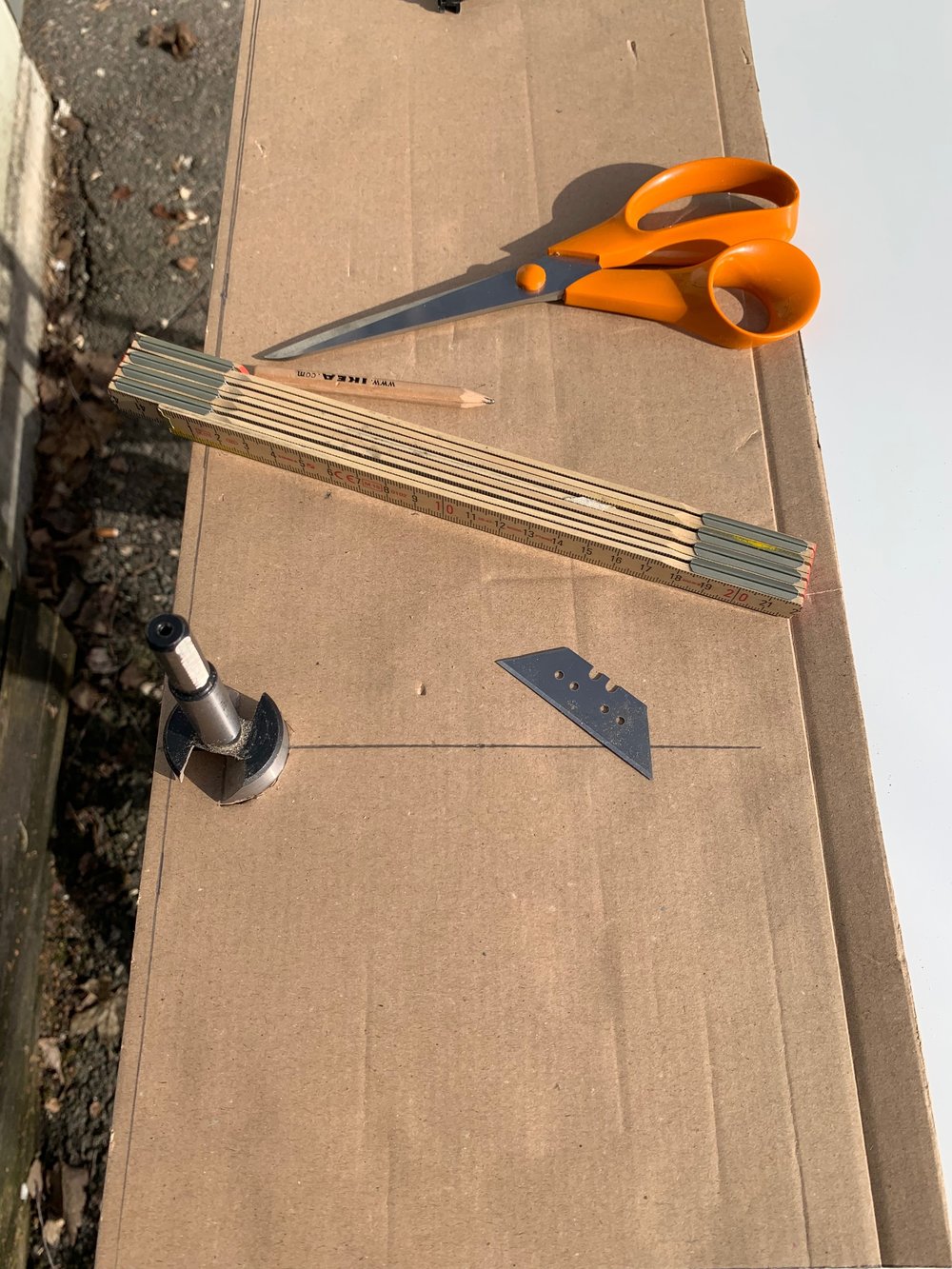 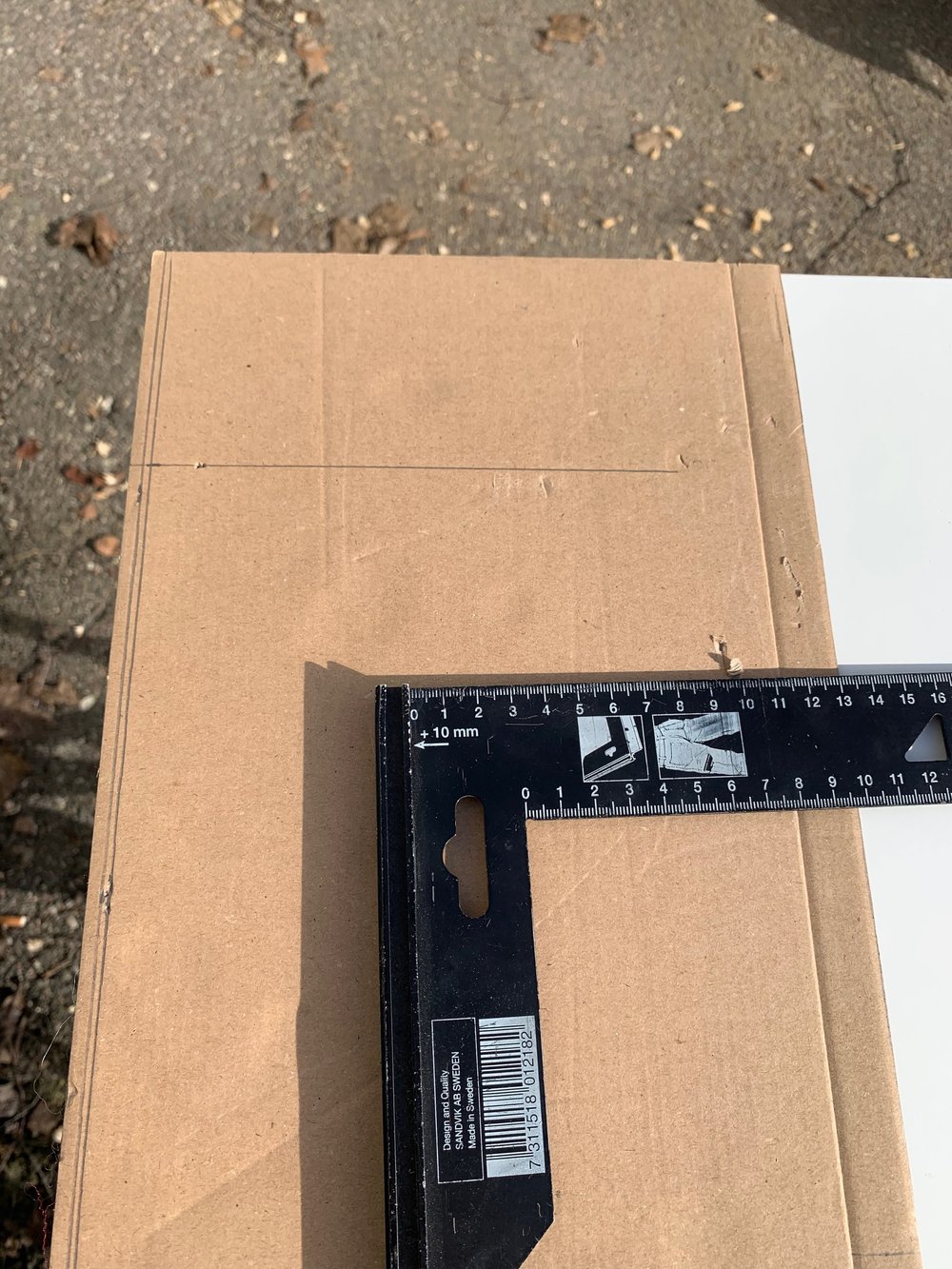 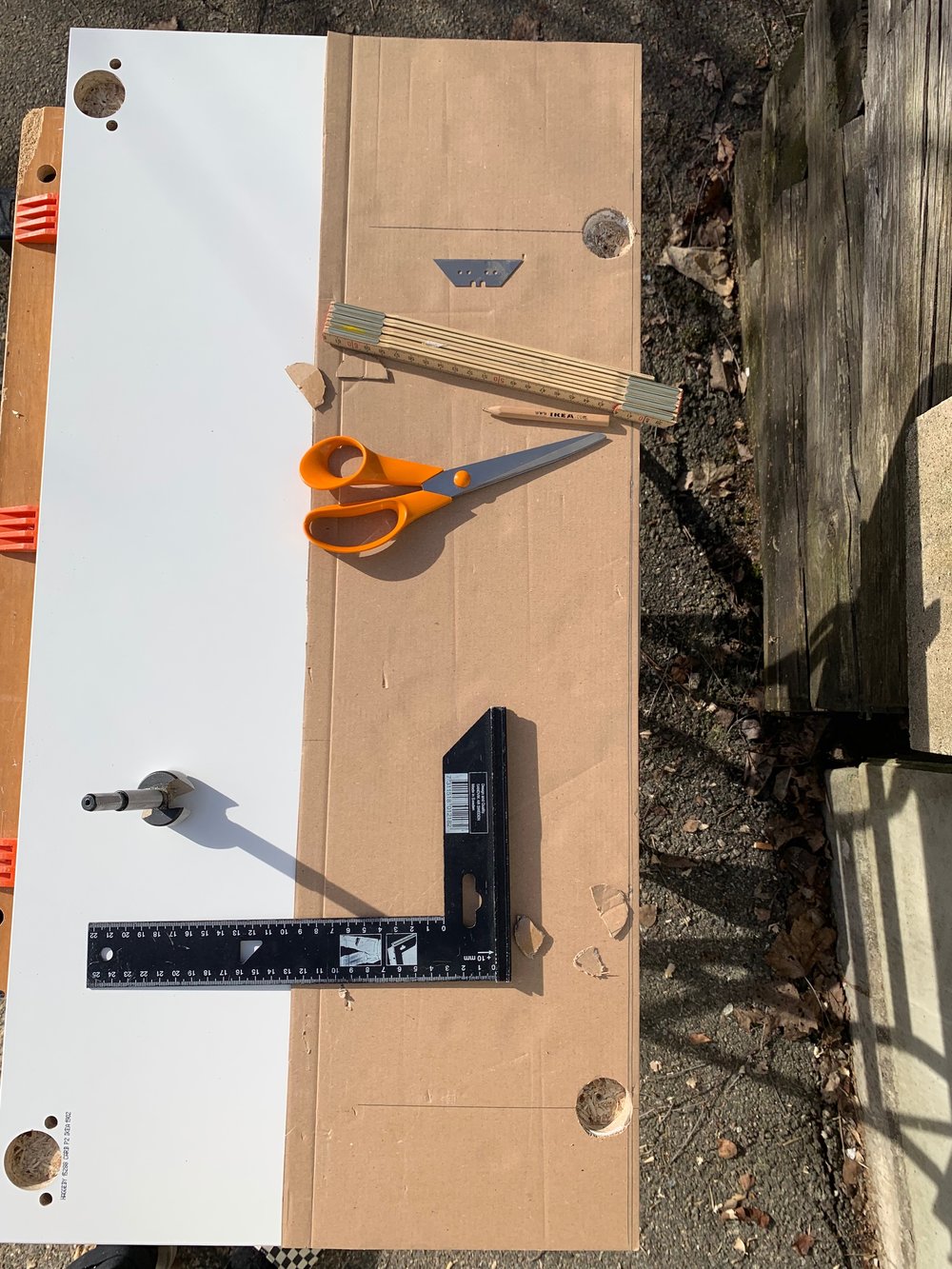 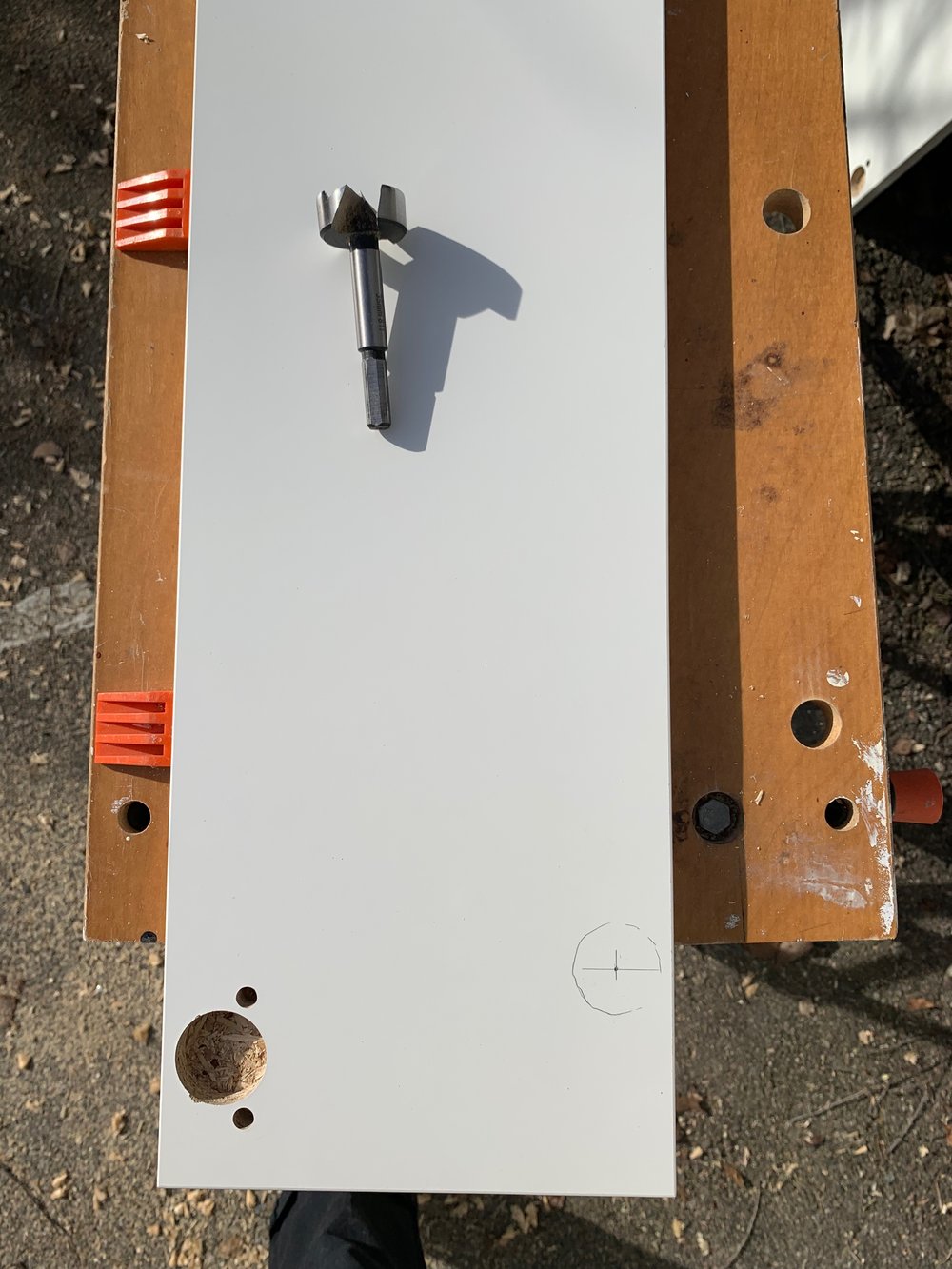 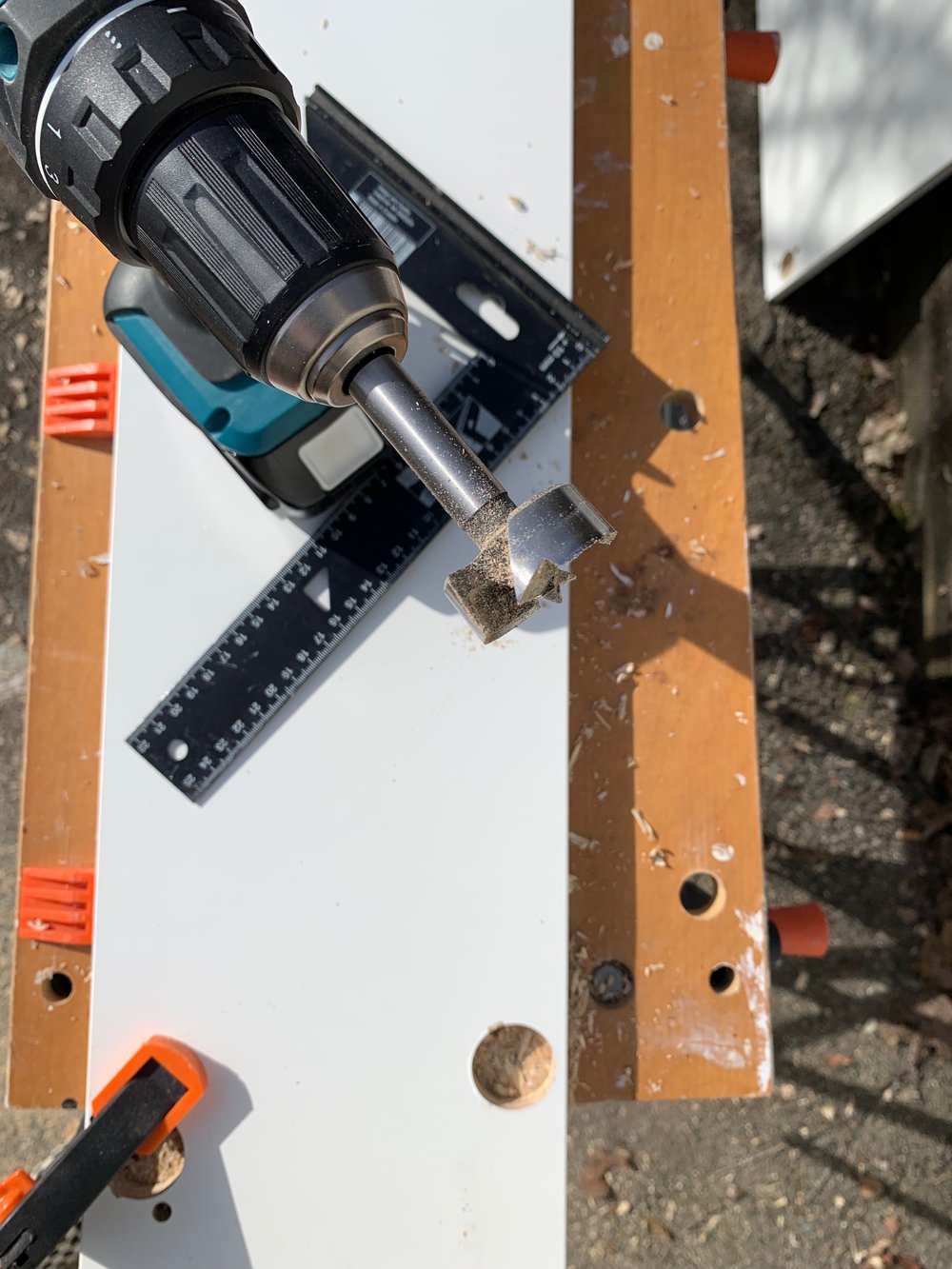 Dear me, for this one I had to google - I did not know the bit I used was called a ‘Forstner Bit’, but now I do and I am happy to pass it on! I really love this tool as it’s so versatile and you can drill nice even holes in everything or just makes insets, as I did here. Make sure to keep a good eye on the depth you go in with the bit as you do not want to break through on the other side.

The bit itself can be attached to any kind of drill, and can be bought everywhere from Bauhaus & Byggmax (in Sweden), to Homedepot & Lowes (in the US/ Canada) or even on Amazon. 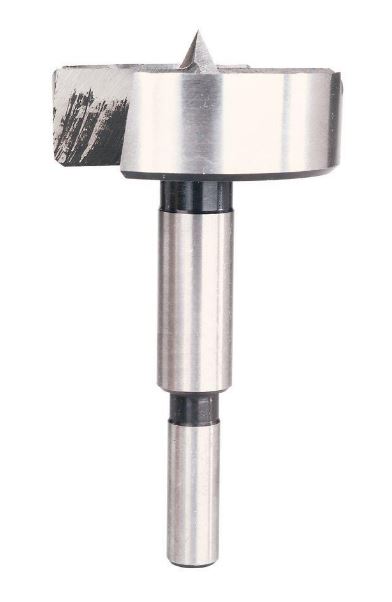 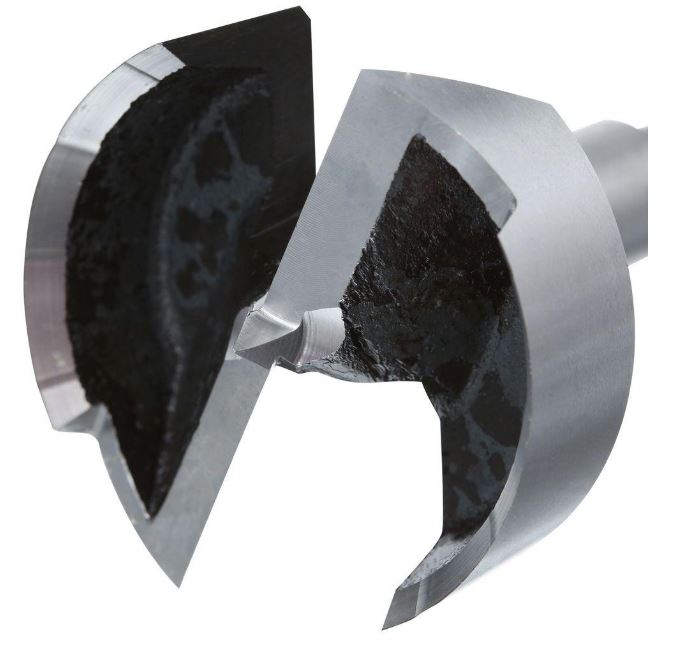 After I preppared all future-to-be-doors with their respective door hinge holes, I started making a new template - this time for the frame and window cut out. Things I had to consider here is that the frame itself should not be too small to continue have strength and not break apart. The measurments itself are completely up to you, depending on what look you want to achieve. I opted for 75mm width.

You technically do not need a template, but I found it easier to do a qick trace & draw instead of measuring out every single door. It does get tired after the 2nd ;-) The template itself I made again with cardboard, since I had so much of those!

Step 4 - Drill hole in the opposite corners

After you traced or measured your window, you want to drill holes in each corner (big enough) for the jigsaw to be able to have a starting and ending sawing point. 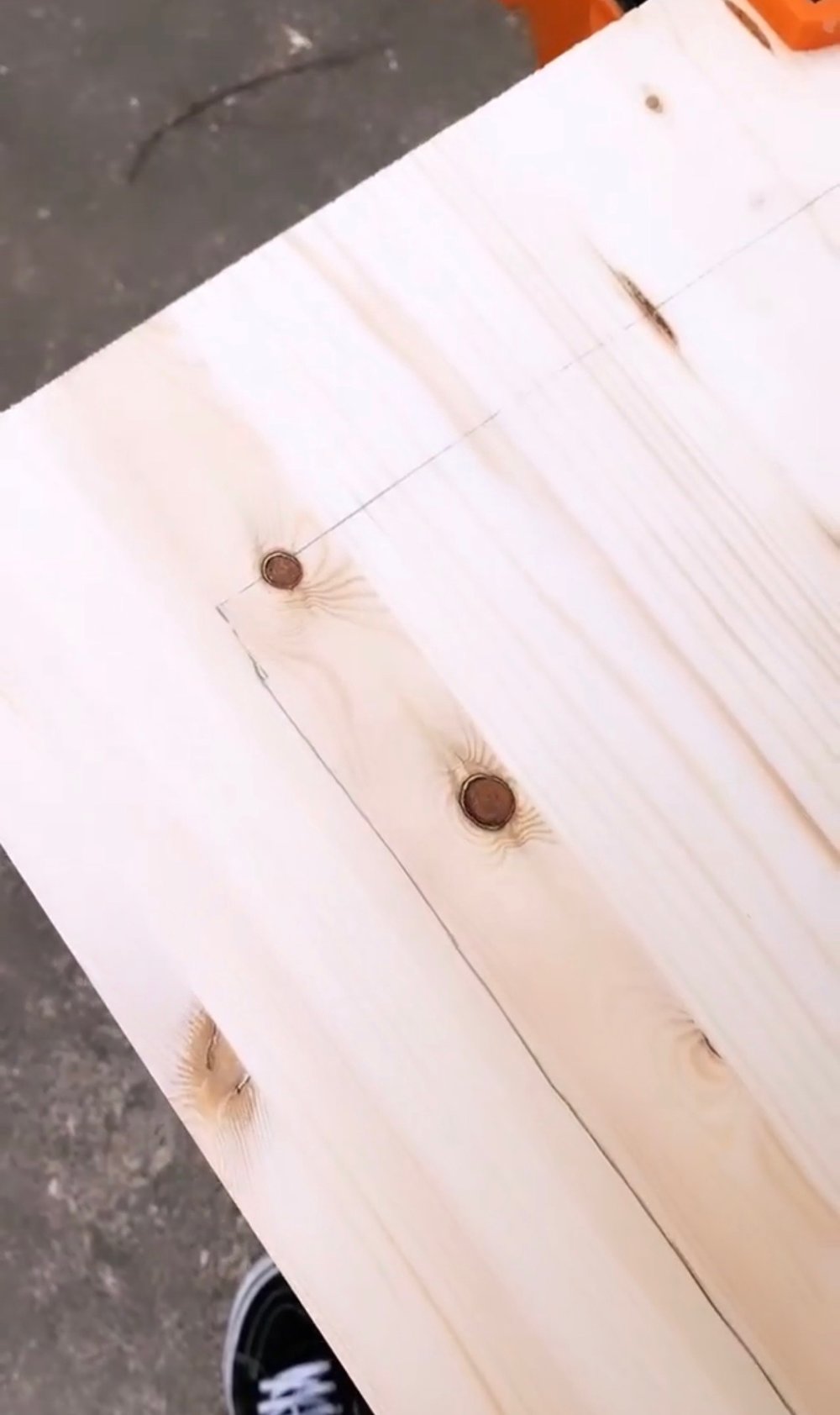 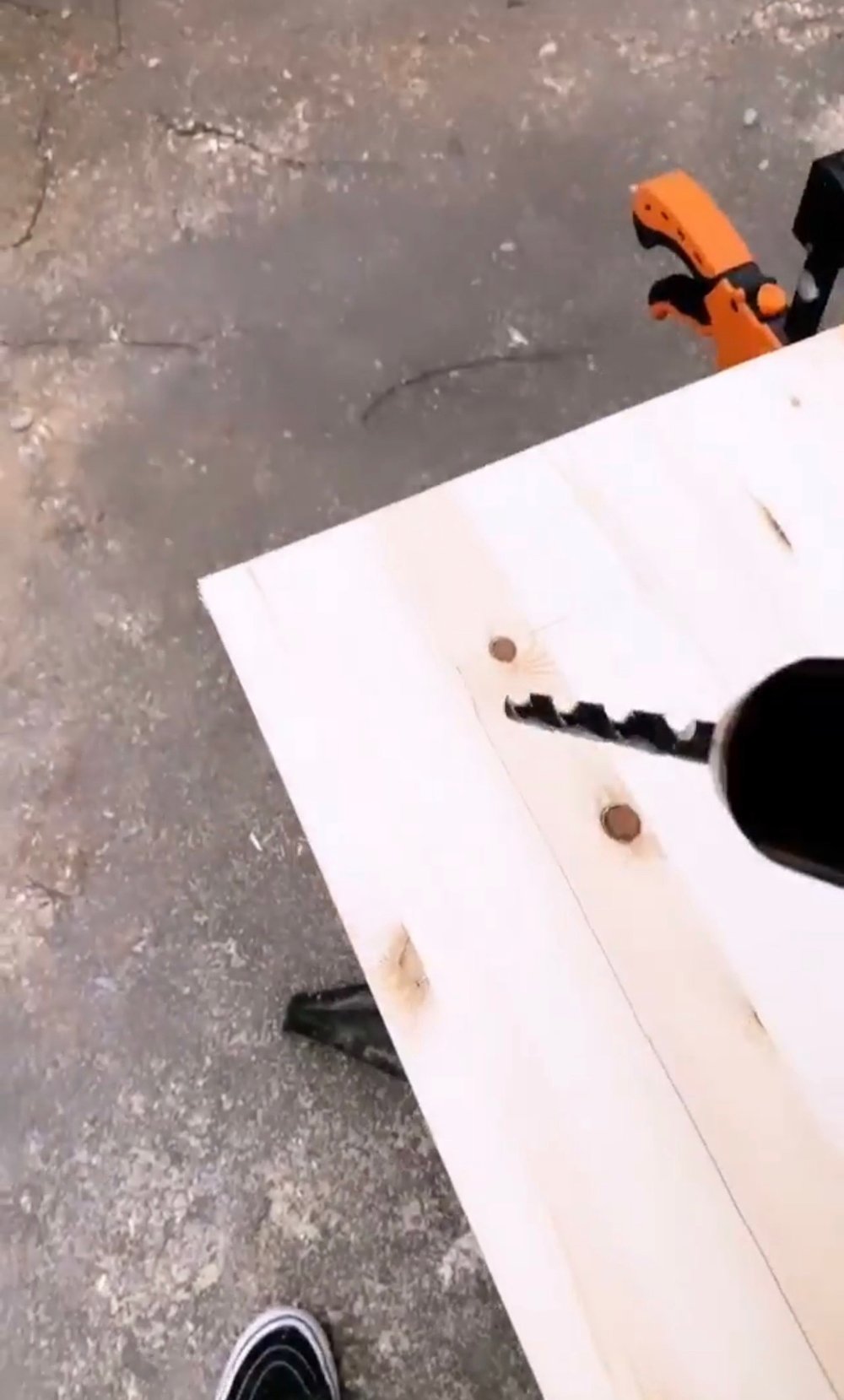 Step 5 - Use a jigsaw to cut out the window carefully

Again this is all a bit practise, so I suggest to practise sawing fairly straight lines before taking it to the doors. Watch the little laps video to see me making on window cut. 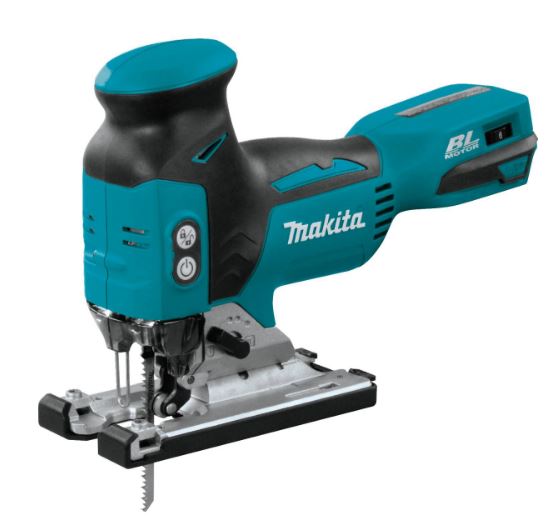 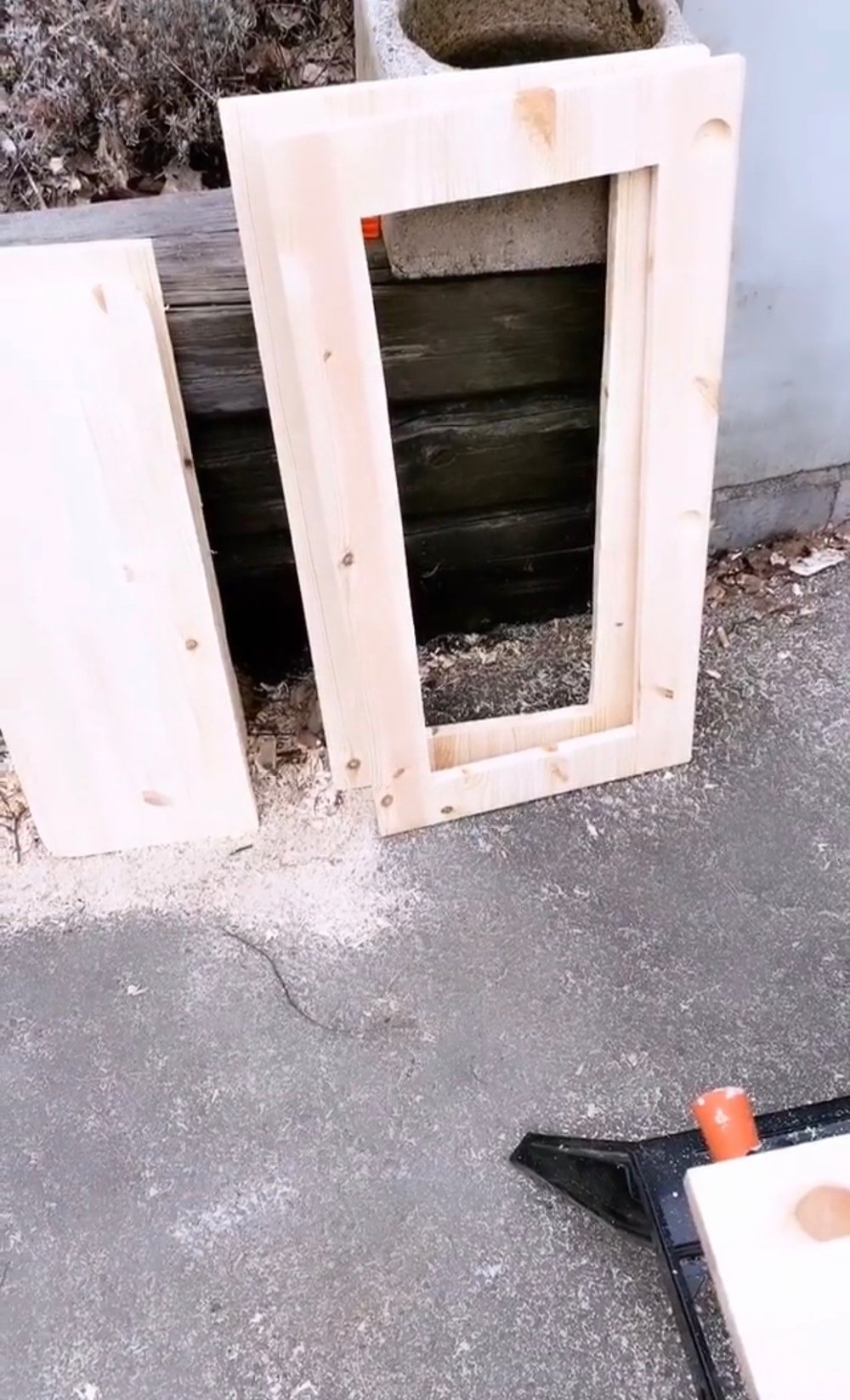 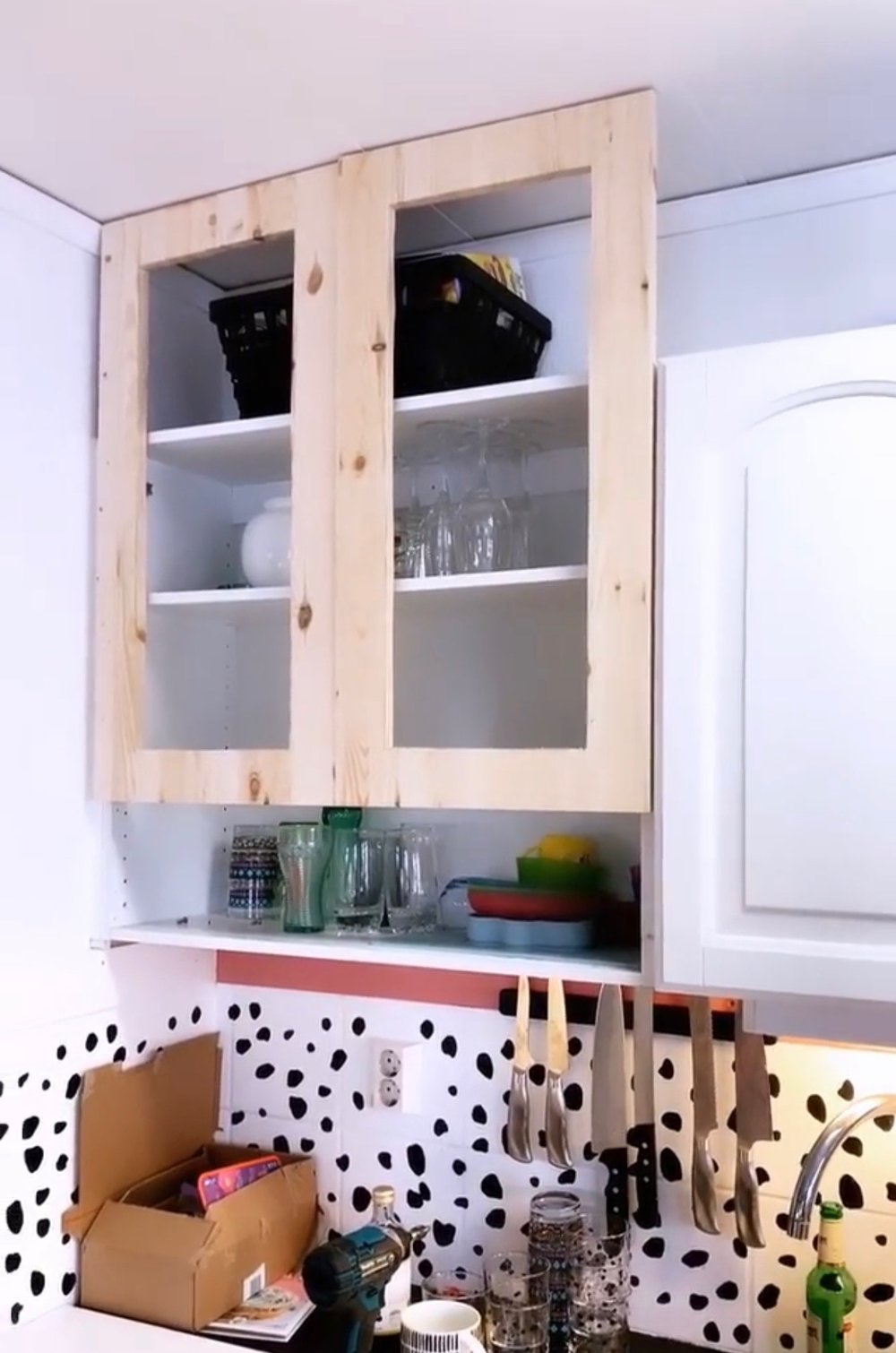 You can either sand the frames by hand or use a sanding machine - I swear by my Makita! I usually start on wood with 180 grit and move my way uo to 400. The secrete here is to sand your first round, remove all dust with a damp cloth, let it try and oil/ varnish the first time. After it tries, sand with 240 grit paper, oil again. At this point it will already be smooth but if you want to get it almost polished to touch, do another round with the 400.

I used ‘Hårdvaxoilja’, which is my go-to in Sweden. This one protects and give the wood an either satin or matt finish and can also be purchased with a white wash tint. 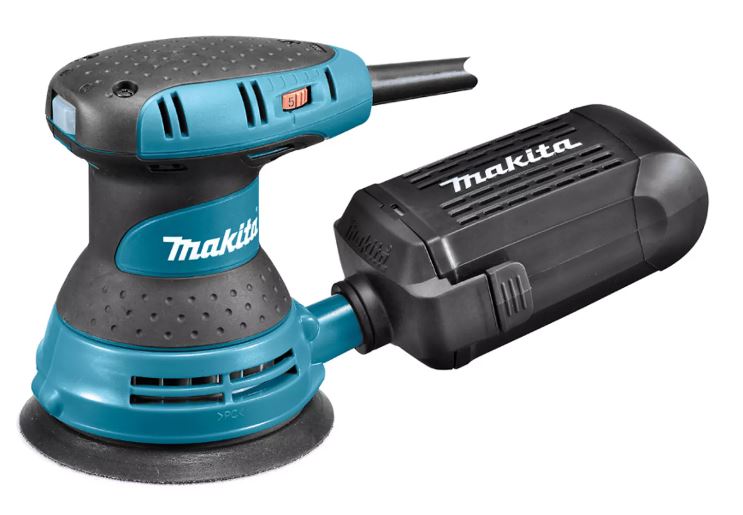 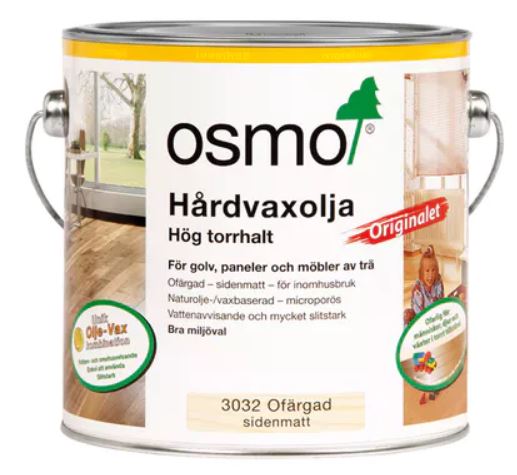 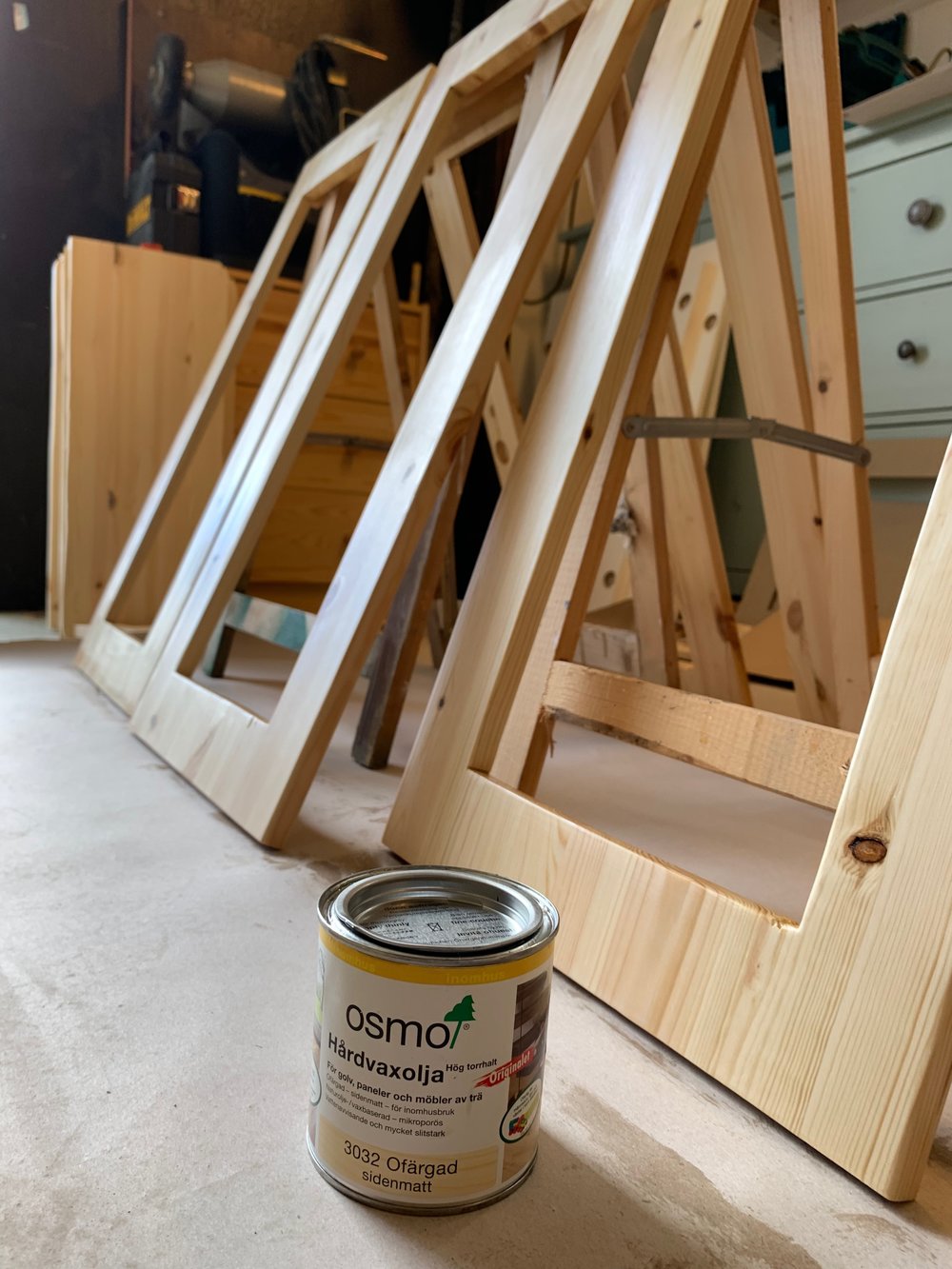 Ok guys if you are on my side of the world any type of can and rattan does not come cheap - infact this part was more expensive then all the wood for the doors. So it was super important to take correct measurments to buy exactly as much need. 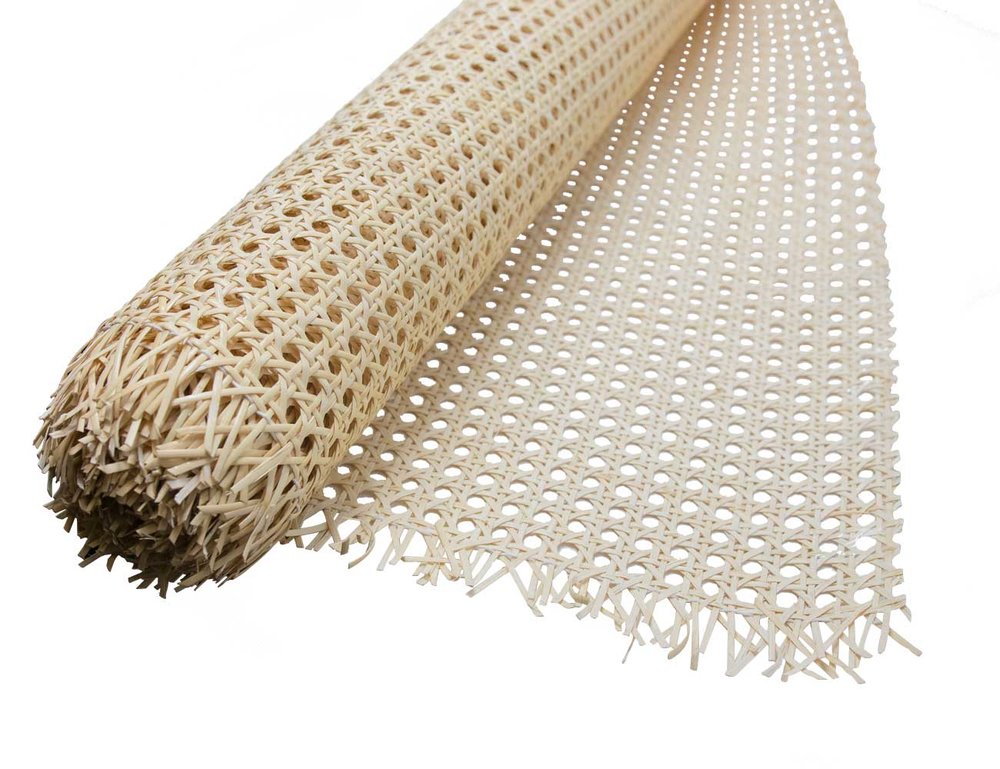 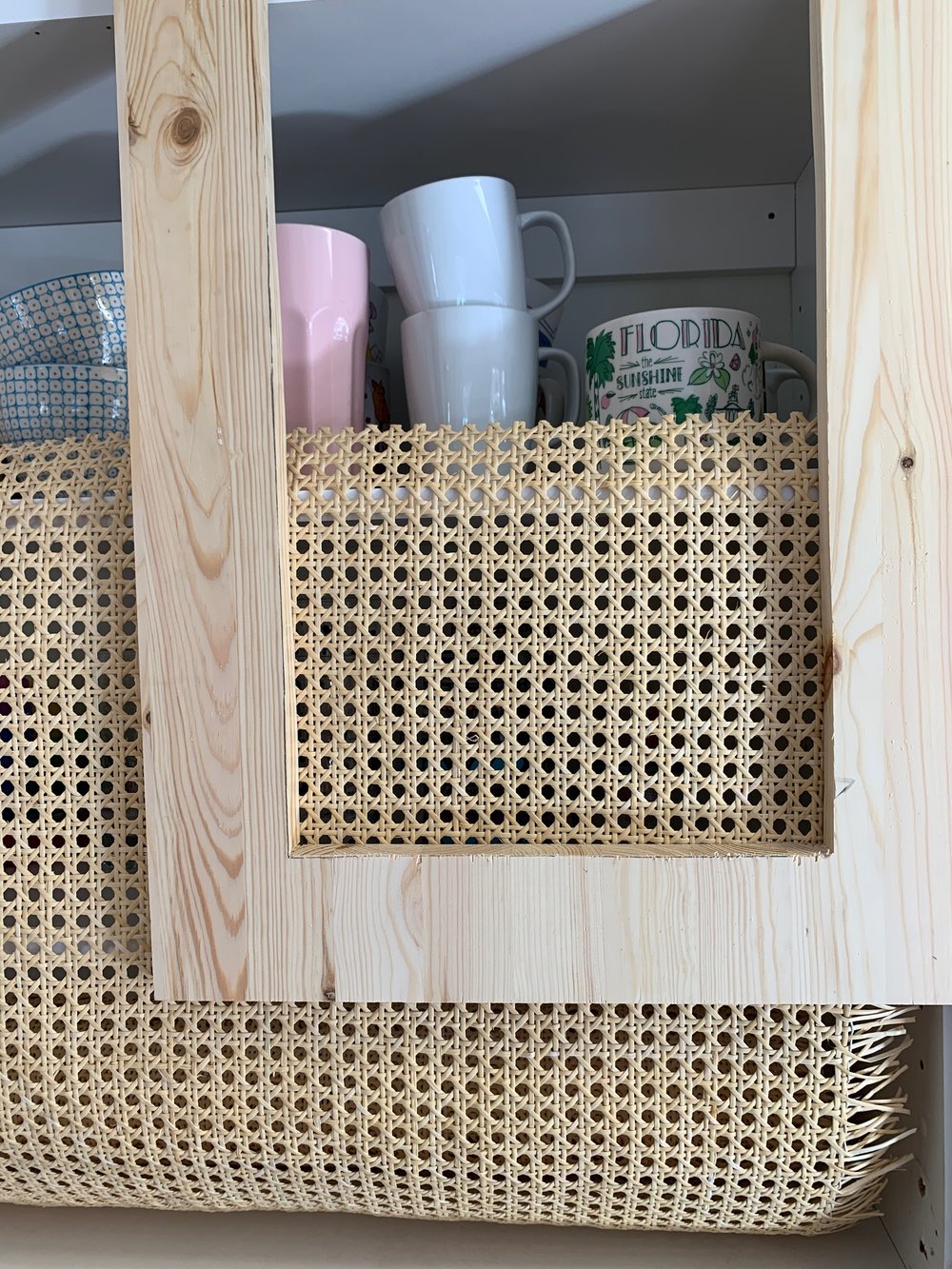 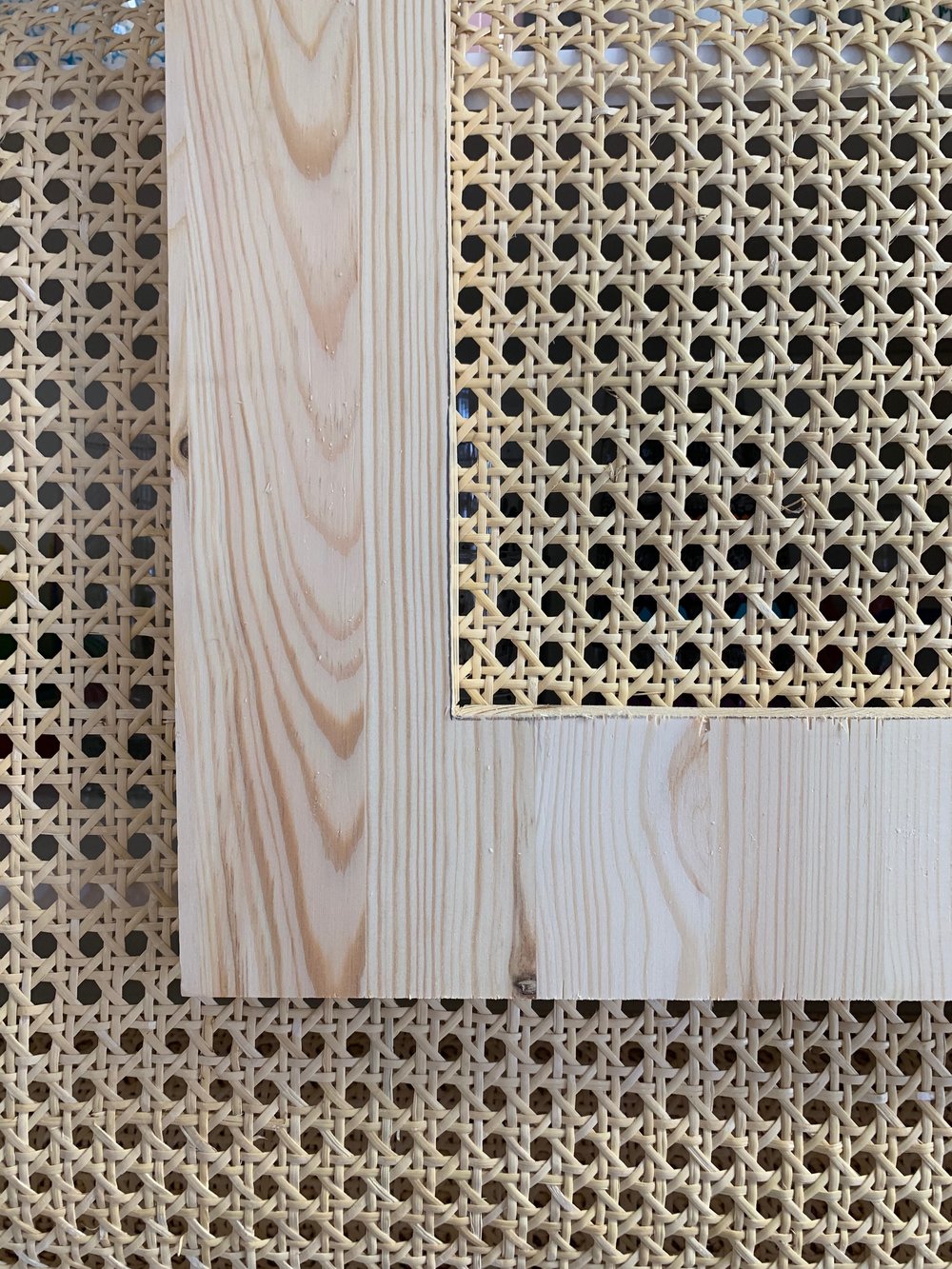 Step 8 - Attach the rattan to your door frame

Hey you are nearly done with your doors! Clap yourself on the shoulders!

This part is fairly straight forward - you want to lay the rattan with the right side up, on in the inside of the frame and attach it to it. I used a simple staple gun. Once I had one side attach I made sure to keep tension to fix the opposite side and the contiuned onto the sides. 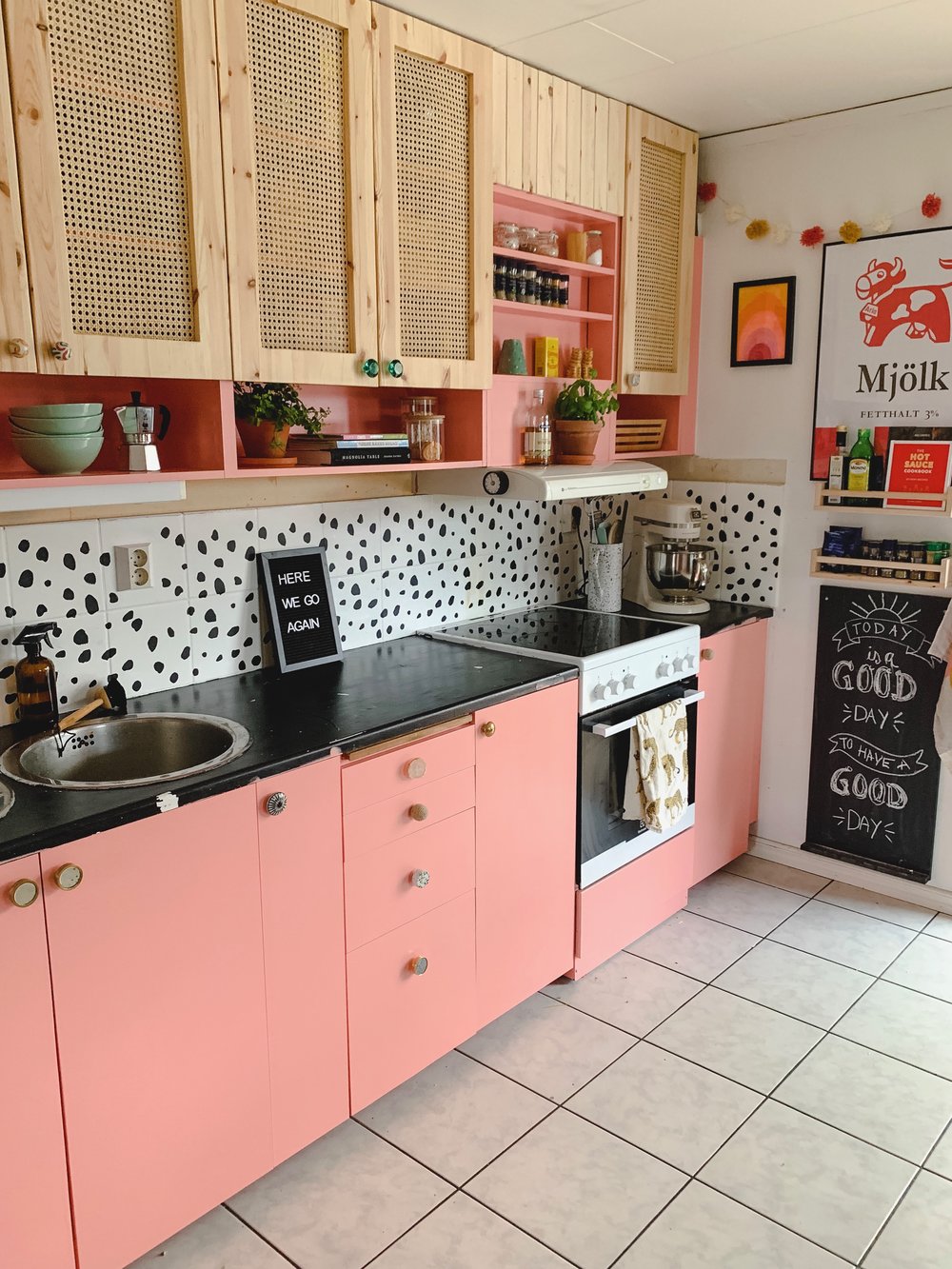